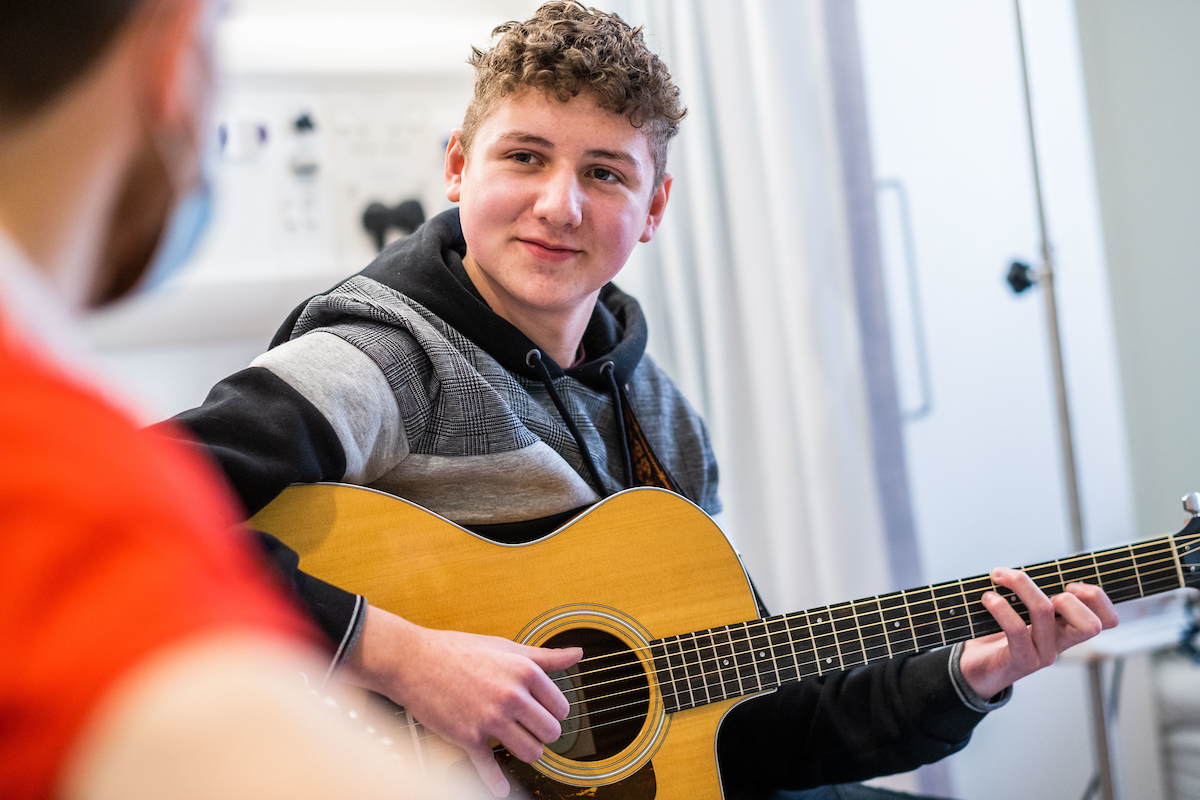 Kieran was diagnosed at birth with Cystic Fibrosis; a genetic respiratory illness which affects the lungs and digestive system.

At 16, he developed NTM – a complication which can cause chronic pulmonary infection. He spent three months at the RHCYP, receiving four doses of antibiotic medication every day.

Kieran arrived at the hospital with his guitar and became a regular visitor to our Hub, where he enjoyed using our VR machines and arts supplies. And then he met marvellous musician and ECHC artist Rhys.

Through playing with Rhys, Kieran’s confidence grew and grew. Eventually, he was learning the chords and lyrics to four songs in one day and even taking requests from the nurses!

Kieran says: “Meeting Rhys was a breath of fresh air. I had my guitar in the hospital and when Rhys came in with his, we immediately started jamming. Rhys taught me a few new songs and gave me some good advice about writing my own music.

“I played my guitar more than ever during my hospital stays, sometimes for more than 6 hours a day so my technique improved at a fast pace!

“Rhys showed me lots of things to help boost my skills and confidence in playing the guitar. He also played a jazzy version of Happy Birthday for my 17th birthday which I will always remember. My parents could definitely see the progress I made and they also enjoyed singing along to some of the songs too! 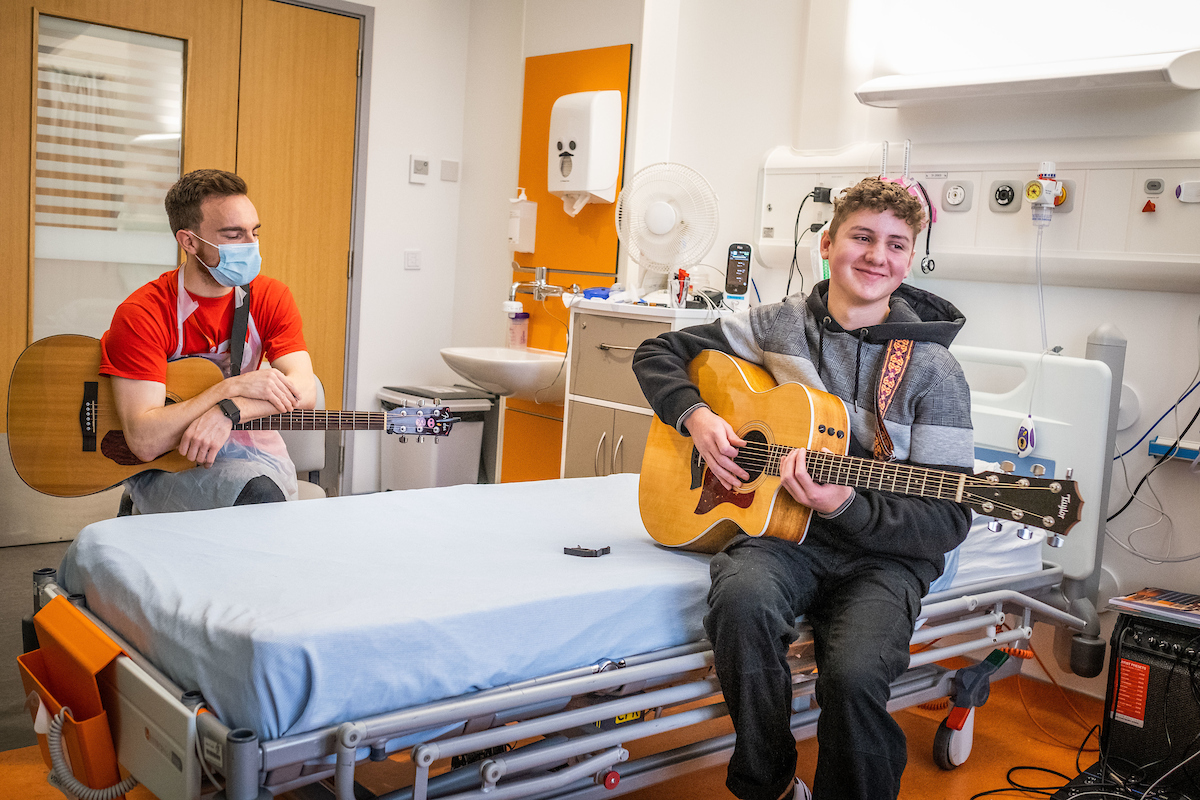 I played my guitar more than ever during my hospital stays, sometimes for more than six hours a day. With Rhys' guidance, my technique improved at a fast pace! 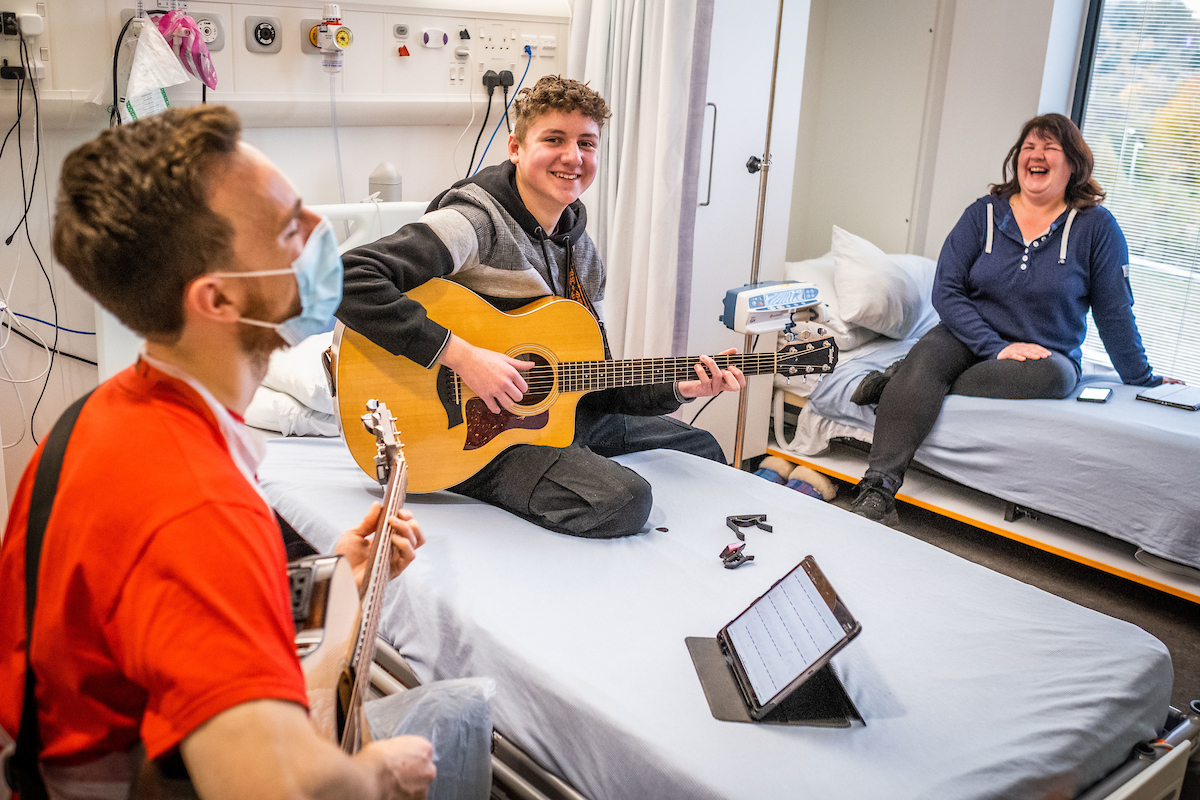 “The ECHC arts programme is a nice touch, not just for the kids but for the parents too! It definitely helps lighten the mood and lets you escape the thought of constant treatments.

“After my treatment, my overall health has improved and I no longer need to go to hospital so often for infusions. Next year I’ll be moving over to the CF Adult team, but with some good memories of my time at RHCYP.

“As for music, I have started on a song-writing course in Edinburgh and I am applying to further education. Thanks to Rhys, I really hope to get into the music industry.”

Thanks to your donations, we can bring talented artists like Rhys from Tinderbox into the hospital and make a life-changing difference to a young person like Kieran. We could not do this without your support. Please consider donating today to keep making this work possible.

Click here to find out more about our hospital music programme & how your donations help.